Hello, I’m new here. So I don’t have a dev kit or really know how to program, or anything, but I have plenty ideas of (mostly more complex) games, so notify me, if you want to collaborate on any of them.
So I just start with the most complex one, because I really like it and it would be amazing, if it works.

Creating this topic I saw there already was an idea for a dungeon crawler, but as much as I’ve seen, it’s diffrent from mine.

Players choose one of 4(5) Charakters. By clicking through the colors of a solo blink. Each color stands for a certain character with it’s own special abilitys.

The rest of the blinks will be formed on to a cluster, buliding a room of the dungeon. One blink will be the entry-door (completly red/orange). Befor the gane starts there should be a level set (I thought at the door). The game starts by adding the charakters to the room. For the start they should touch the door, or characters, that touch the door.
When the characters enter a room the game will randomly create enemys and another door (at the other side of the room or at least somewhere on the edge of the room, far away from the entry-door.
The players will move and fight their way through the room to the other door. On players turn a player can click his character to active it’s turn. A turn always has to stages, Move and Action. While the player can choose if s/he first moves and then actions, or the other way around, or just do one of this, ending the characters turn by double clicking the blink.
After all characters took their turn (it don’t has to be the same order every time) the game will move the enemys in the room. They also have the two actions and will always move towards and try to fight the nearest character.
When clicking the character the room will show, by pulsing, the places to where the the character can move (white pulsing) or how far they can attack. (red pulsing. Archers and Mages have a ranged attack) By clicking to a moveble spot, the character moves there. By clicking an accaseble enemy, the character attacks. The mage also has the ability to heal by clicking another character in his range (or himself, single click).
Enemys will block the path (charakters can’t move through enemys, but also the other wys arround leave strategic options for the players.)

Optional: Let the room not just create enemys and an exit-door, but also treasure and obstacles, blocking the path randonly, or the archers distance view/attack. In this case, there would also be the action to click a nearby treasure.
There could be diffrent kinds of trasure (three golden corners(Y-shape)-normal treasure / six golden corners-chest that only the thief character can open)
Suggestions for obstacles: Water(diffrent blue than probably the characters) Slows down your movement
Pillars (brownish/dark?) Blocking the sight for distance attacks.
When Players decide to have literaly holes in their room, (now blink/empty spot) they would be like holes in the ground maybe even for strategic uses.

When a character reaches the door on the other side, he can click that door to finish the room. The door and the characters will then be removed from the cluster, creating a new shape and a new room, adding the door and characters again, the game will create a new board. Depending on the level, the players must get through a certain amount of rooms to win the game.
Optional: Have a boss enemy in the last room (no door needet then, just kill the boss) maybe it is even more than one blink size (if that’s possible)

Optional: Characters can level up within a game, getting experience by defeting enemys or finding treasure. They could be shown as a diffrent color pulsing within the charackter. Getting the 6th point will level the character up. When they level up, they gain a life-point, probably speed(walking distance), (attack/defence), (make their special abilitys better) They can level up only twice, getting up to 5 lifes (6 for Fighter(Tank)) The Level up would also increase the heal rate of the mage (Level 1 heal 1 damage, Level 2 heal 2 damage…)

Optional: Special abilitys:
Each character has a special ability it can use by long pressing the character, when it’s turn. The special ability is then the action.
Ideas:
Fighter: Wide swing – attack all enemys at once, that are next to this character.
Archer: Fast shot – attack two/three distanced enemys in this turn
Mage: Explosion – Distance attack that hits multiple enemys in an area
Thief: Shadow walk – Move again befor or after your attack without enemys blocking your path (move thorugh enemys)
(Tank: Hard thrust – Push an enemy back one blink. If it hits another enemy/character they both get 1 damage, dispite their defence. Pushing it into an obstacle will also get it one more damage (Eliminate enemy when pushing it into a hole or water?)
Specail abilitys can only be used a set amount of numbers (once?) in a room. (If more than once, it could be shown by pulsing a brighter light within the color on 1 – 3 corners, depending o how many special moves are left.)

Optional: Finding objects:
Instead of just finding points to level up, there could also be an option to find objects, like a heal poition, displeyd as a diffrent color pulsing in some pattern. But it could get a little too much colors and pulsing on the characters XD Using it would be like the healing from the mage. Use the action, click on the character to heal it. Heal another character, it has to stand right next to the one with the poition.

Optional: dark room
There could also be an option for rooms that aren’t revealed completly at the beginning, but characters would „look“ only one blink farer then the can walk (not super ideal for the archer), but working together they can reveal more of the room and literaly find the other door.

When a character looses all his life points, it is defeated and can’t move or fight anymore. It will stay on the board, untill another character reaches the door. When the exit-door is clicket and the characters are removed, also remove the defeated character and it can play again in the next room (having one life left again, but can be healed from the mage)
When all characters are defeated, the players loose the game.

I don’t really have much idea how the dice-roll attacking/defending and actual damage making would work best by now, but I think I covered my basic idea about this pretty much.

Please excuse my crappy english spelling. I hope it was understandeble, I just don’t know if it is makeble.

Started with some basic sketches for better explanation.

Befor the game starts double click a single blink to turn it into a character. Single-click through the diffrent color-options. Double-click again to confirm your choice. The character can then be attached to a door-piece and then the room-cluster. 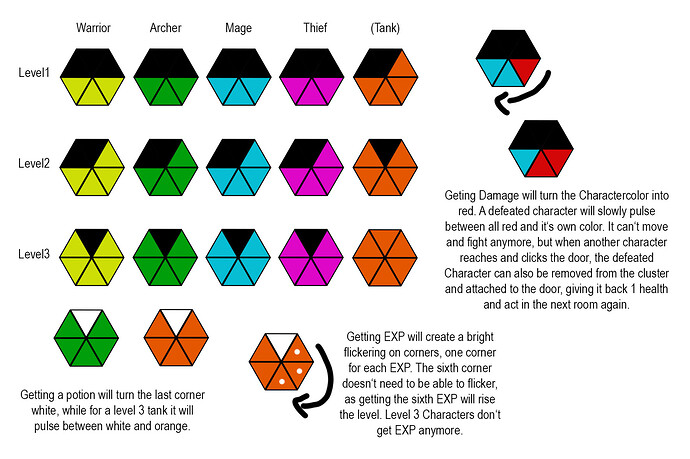 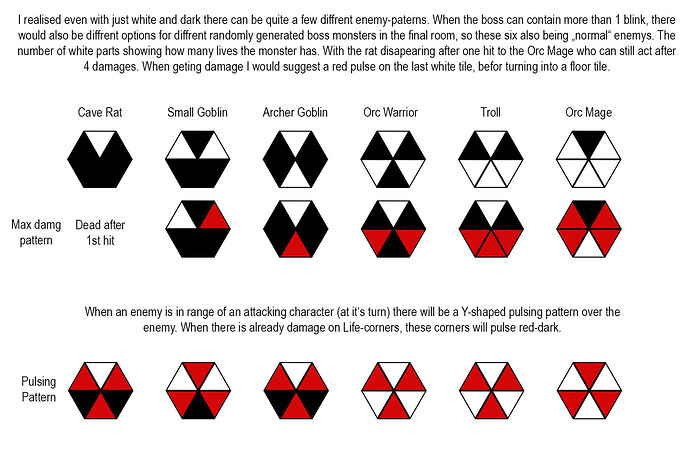 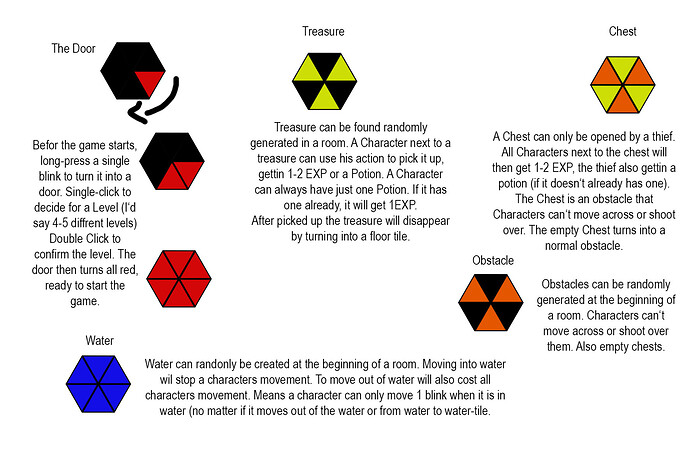 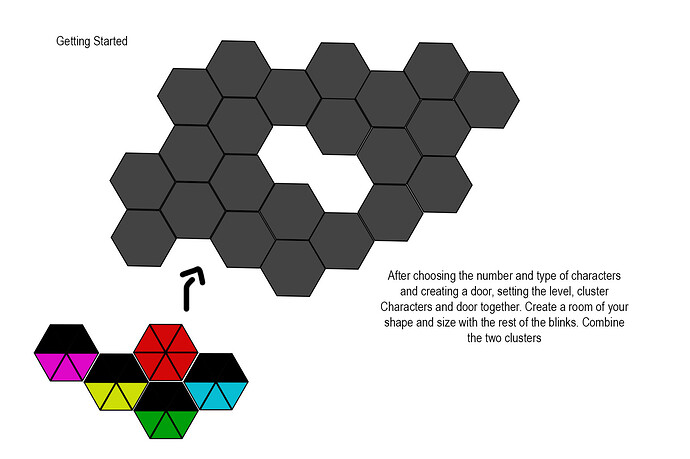 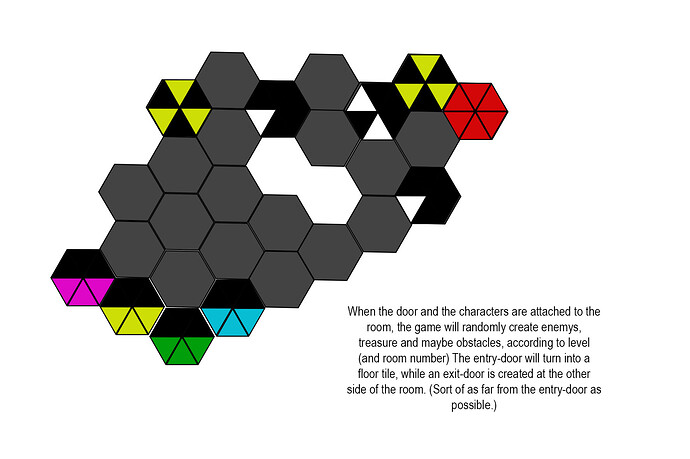 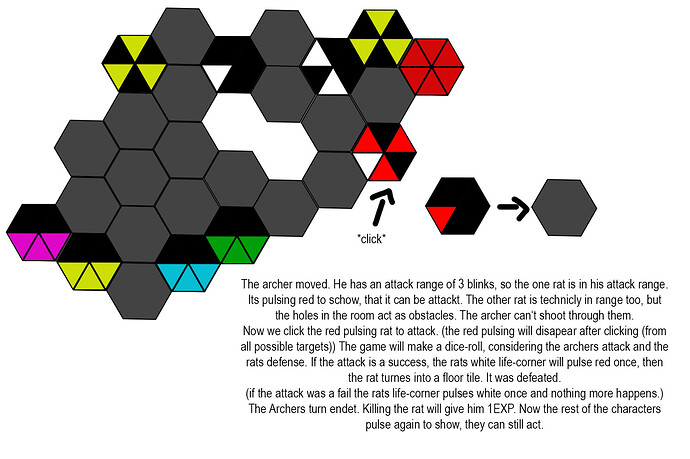 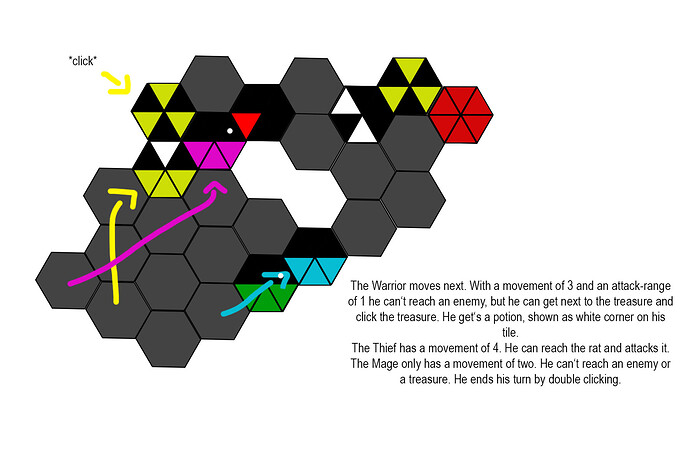 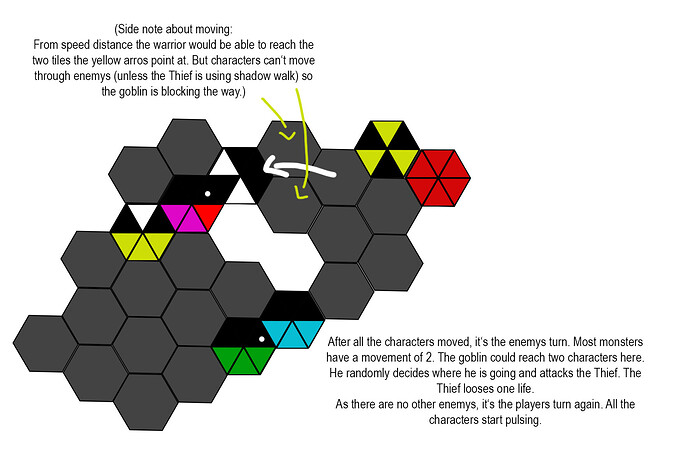 Those diagrams help, you would need to check how they would actually look in a Blink (mostly because of color bleed among faces). Also, another thing you could do to help flesh out how the mechanics would work is write down a play by play of a few turns taking into account the expected events (attacks, movement, things affecting those).

I can’t really test or try anything without a dev-kit. But I guess colors/combinations can be changed. I can alter things, when I know if something works or not. But I’ll make more sketeches and explanations about the gameplay. It just takes time

(Ok, I know I edited one post befor, but now I can’t find the editing option anymore 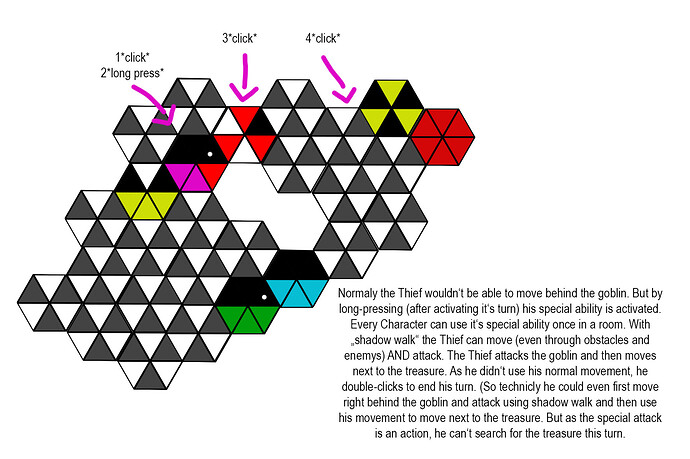 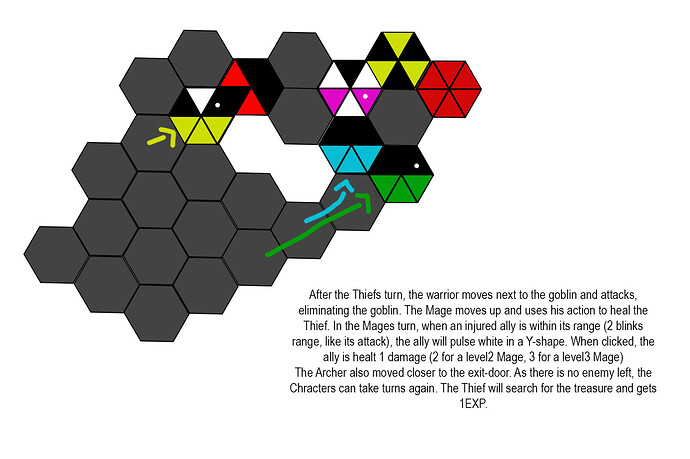 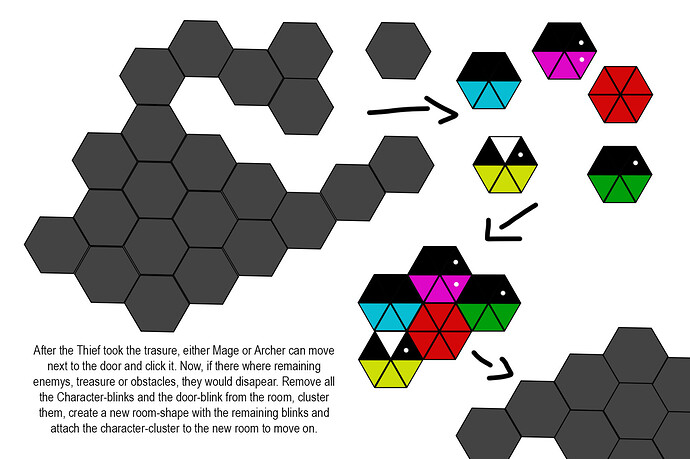 Spezialattacken1772×1181 131 KB
As mentioned befor, every character has a special attack, it can use once a room, by long-pressing the character (this is it’s action part of the turn)
Warriors wide swing:
Basicly attacks all enemys surrounding it. High attack. Every enemy makes it’s own defense roll.

Mages explosion:
Click a blink in the secons row surrounding the mage. This will be the center of the explosion attack. Every enemy in this area gets attacked

Archers fast shot:
Click up to three enemys within the archers attack range. All three get attacked.

I left out the thief here, as I mentioned it detailed befor.