So this is just a very basic explanation of how a tower defense game could work with blinks. Thinking about it I had two diffrent ideas, the first I thought of where you can replace your towers during the game, leveling them up wisely to keep the hoards away from your town as long as possible. You would have a set number of blinks to place as towers, maybe not as much, as in the second version. 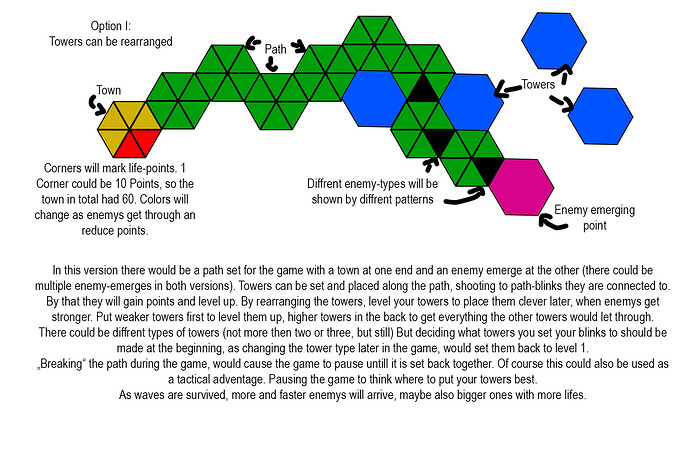 In the second version there would be field parts around the path, that can be turned into towers later, requiering the game to count points in the background. 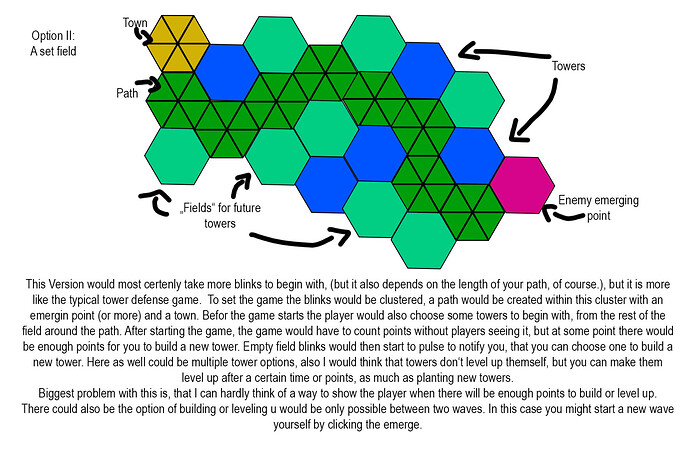 There are also two other optional functions.
First would be active shooting:
Twoers only shoot on enemys, when activly clicked most likely with something like a cool down in between that will have you to watch when you click. Leveling towers would reduce cooldown as one optimization. This would also allow you to make it a multiplayer game as well, as more hands can click more towers more easyly, as the game gets harder. In this version I would think defenetly, that upgrades and new towers can only be made between two waves.

The secons is enemys fight back:
Enemys will damage your towers (maybe not all of them, but stronger/bigger enemys) having you to repair your towers. I would see this more for the second version, where Towers, that are not repaired in time will be turned into fields again. In this case, there could also be something like shield towers, that protect your shooting towers as one of the tower options.