I’ve got a lot of ideas for games, but I needed to learn how this whole thing works, so I decided to start with what seemed like it would be the simplest to implement. A friend suggested “an autobattler,” so I brainstormed what blinks as a platform have that are relevant to that. I was reminded of a mathematical “game of generals” I once heard about, and looking for it lead to the Phillippine Game of the Generals. It occurred to me that if GOG were played with blinks, no disinterested arbiter would be needed. Anyway, this game borrows some ideas from that game and some ideas from D&D.

I’m looking for thoughts on both game mechanics and theming/animations. All of it has undergone several revisions and there’s still some things that could just as easily have gone another way. As it is, it seems to playtest well, but I’ve only played a handful of full games. Here’s an example playthrough: 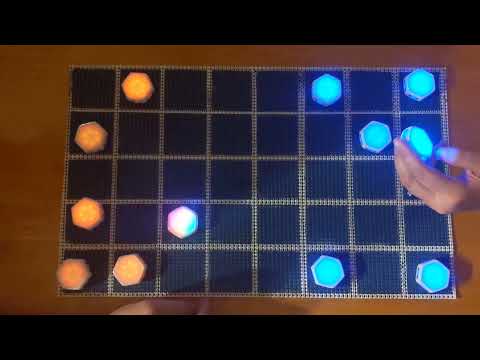